When Jonathan last saw his neurosurgeon when he was just shy of 5 months post-op, and I have to admit, I felt a little defeated that we weren’t done our helmet therapy, right then and there. We were initially told 4 months of therapy – until he’s 8 months old. This conflicted slightly, as he started his helmet therapy 1 week shy of turning 4 months old. The OT was so impressed with Jonathan’s head at our appointment 2 weeks prior, I was crossing my fingers right then and there that we’d be done, even a little early and before Christmas. Then I assumed it would be reasonable if he wanted Jonathan to wear it the full 4 months to December 23, but then surely we’d be done for Christmas. Nope! He wanted us to go right until his 8 month birthday on December 30, so we did. (Actually, he told us to ‘ditch’ the helmet January 1…but mommy chose December 30 as our graduation day, I really don’t think that 2 days would have made or broke us!). 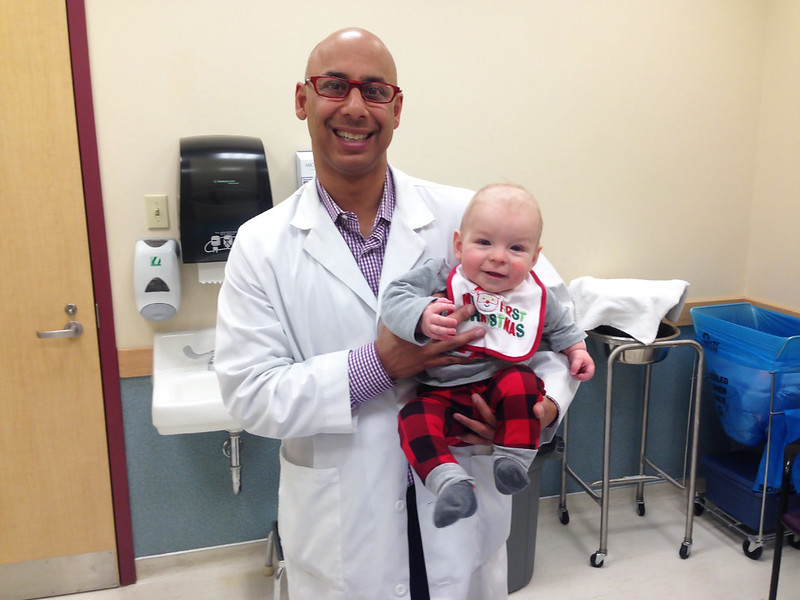 Sagittal Craniosynostosis: Before & After Photos

Before Jonathan’s surgery, his cranial vault index (CVI; how round the head is) was 68%. I’ve explained this before, but if you think of a perfectly round circle being a CVI of 100% (which no one wants), the “perfect” CVI, and goal for Jonathan, was as close to 85% as we could get. After surgery his CVI improved to 76% and within 1 month of his helmet he was at 79%. His last CVI at his appointment with the neurosurgeon on December 12 was 83%. We could not be more pleased! I’m picture-taker, and the proof is in the pictures! 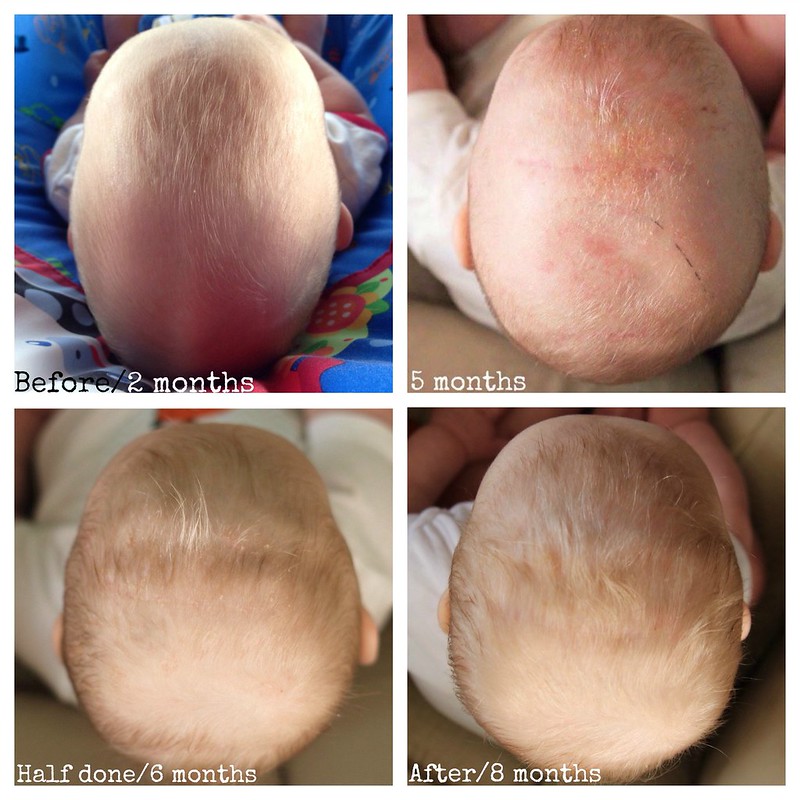 I take monthly photos of all my babies, and you can see here at 2 months (when it was brought to my attention that he had craniosynostosis) how bossed his forehead was becoming. 3 months is 11 days post op, 4 months he had been in his helmet for 1 week, 6 months he was 1/2 done his helmet therapy, and 8 months he officially graduated. 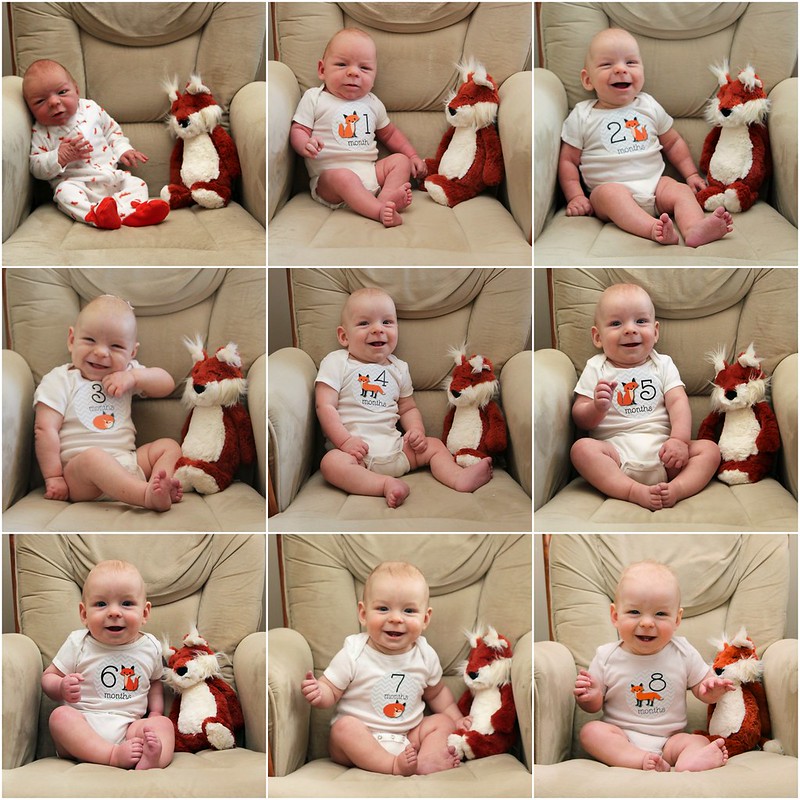 Life After the Helmet – Now What?

We were told by our neurosurgeon that he will regress 1-2% with his CVI, it’s inevitable. This is my one and only hesitation about being done with the helmet: will his head shape hold and will he be okay? Will it be like me taking out my teeth retainer and my teeth regressing to their crooked state? My biggest question was: what are the chances he will need another surgery, and I was told the only circumstance Jonathan would need another surgery is in the very rare case where another one of his sutures spontaneously prematurely fuses. It’s happened a few times in his career, so we pray that isn’t the case for Jonathan! We see him again in the spring, around Jonathan’s 1st birthday! 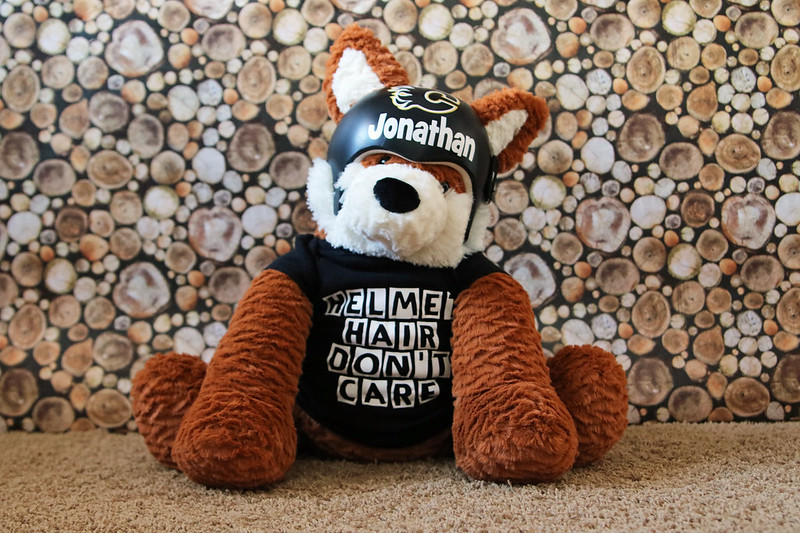 It was fun to count down on social media and to see the love and support pour in for everything that Jonathan has been through. I really wanted to take him to Build-A-Bear to make his very own bear to wear his helmet and the t-shirt I made him, but illness in our family prevented that, so for now his giant Jellycat fox will do the honours! I had a lot of fun taking photos of Jonathan on this exciting landmark day and ordered a custom applique shirt from Nola Sprouts to always remember his time in his helmet (and my love of foxes for him!). 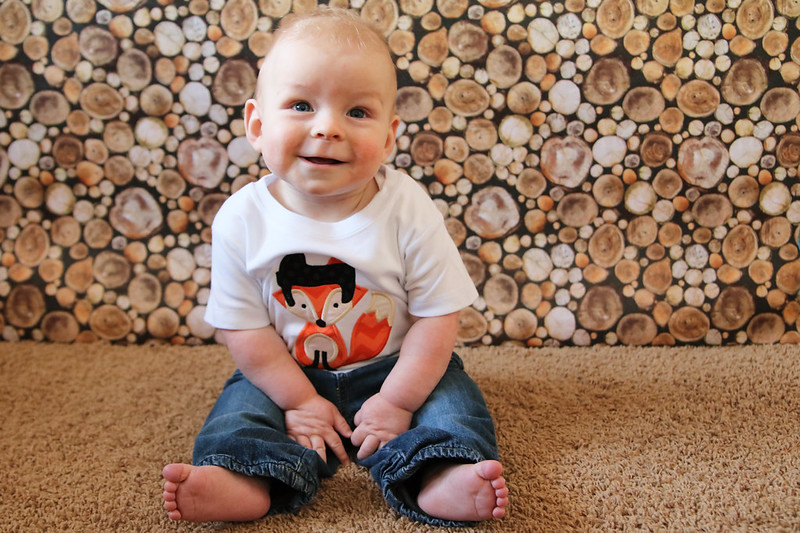 Isn’t he sweet as sugar? Gah! He’s such a happy baby! 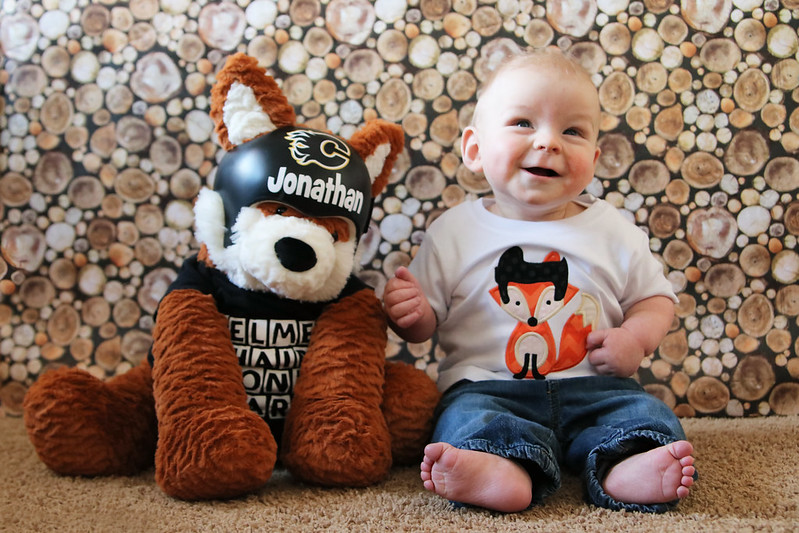 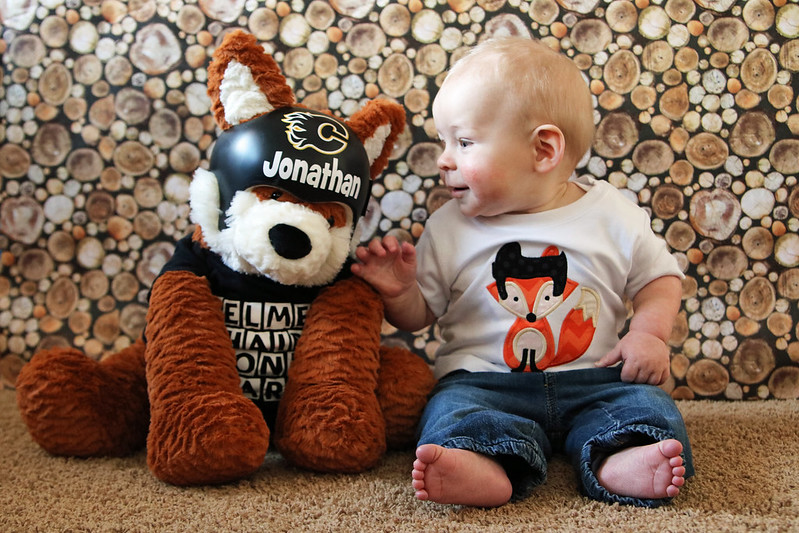 I really couldn’t be much happier with how his head shape has improved. Jonathan always had a slight flat spot on the back/right of his head from birth. No one has actually ever brought this up to me, the helmet didn’t improve it, I’m probably the only one that will ever notice it. His head is not, nor is anyone’s, 100% perfect – but I love him and his head just the way they are and we’re so grateful to be completely on the other side of sagittal synostosis! 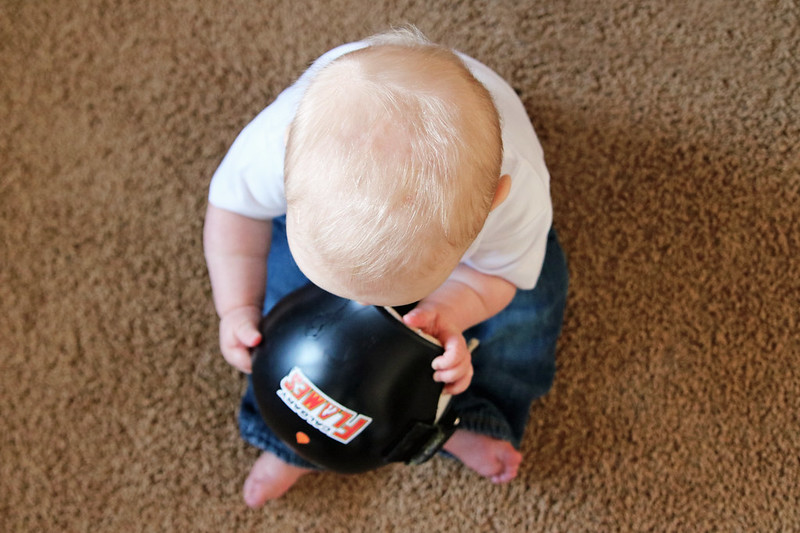 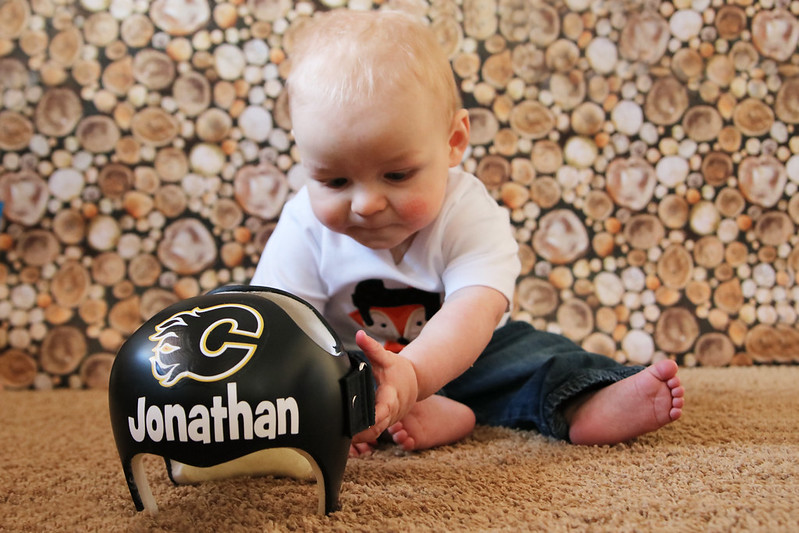 It’s been an adjustment getting used to him without his helmet on, even just a couple of days after the fact. I feel like I’m cheating or doing something wrong giving him all this time out of his helmet! We’re just praying and putting our faith in God and in Dr. Mehta that we’ve done all that we can do and that his head continues to grow normally and in the shape it’s supposed to. He still has quite a bit of soft spot left to fill from where the bone was removed from his surgery (strip craniectomy), so I think that’s a good thing! 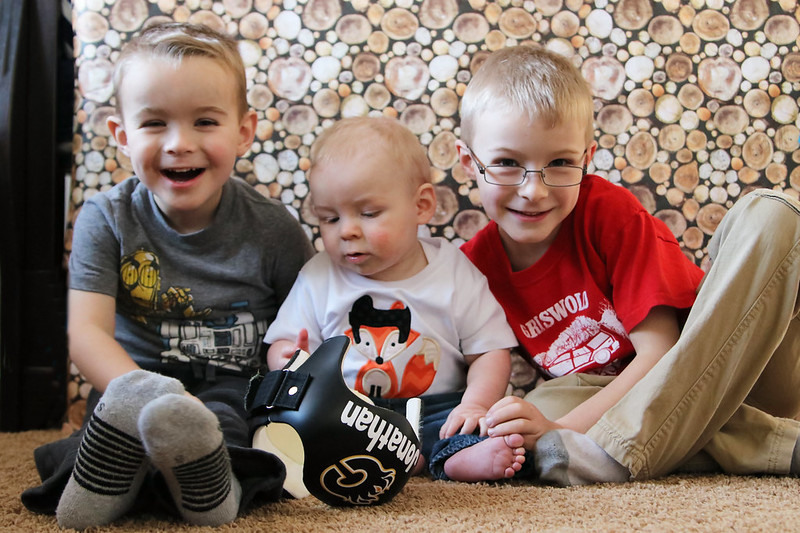 Our family, and especially his brothers, have been so supportive and understanding with all 11 trips to Edmonton and 7260 km traveled. Child care has been provided, homes have been opened, meals have been served – the biggest thanks ever from our family!

If you’re going through any part of this journey, you might find these posts helpful:

Thank you so much for following along, I will continue to update often on Jonathan’s Cranio Journey Facebook page!

Are the ridges only in the back of the skull with this? My son has a bump in the middle front top of his head that has bothered me for a while. His forehead goes out a little bit if he was to have this, it’s not nearly as noticeable. He has had a lot of midline defects, had ties and an oral aversion early on. He is so much better now than he used to be but seems to not always eat as well as he should be or seems uncomfortable or in pain sometimes still after having a… Read more »

Hi Lauren, with a sagittal only fuse, yes it would only be at the top/back of the skull where the sagittal suture is located. I would highly recommend getting it checked out if it's bothering you…it's not a trouble to rule it out and if it needs to be diagnosed then you'll be glad you pushed! In Alberta we see a neurosurgeon, but it can vary to plastics and craniofacial depending on your region. Start with your family doctor and/or pediatrician. Best!

This is a bit of a strange question but could you tell me if Jonathan does that twisty thing with his tongue often? One of thr photos you have on display shows him doing it. My son does this constantly and my doctor said it isn’t a normal trait in kids?