Believe me, there was a time (not too long ago) that I was the biggest scoffer of any gluten-free labeling on foods that clearly did not have any wheat, barley or rye in it. Gluten is a protein that is only found in those specific grains. Gluten-free oatmeal? Clearly there is no gluten in oats! Gluten-free sandwich meat? Gluten-free tea? Same! Or was I wrong all along?

My 4 year old nephew was diagnosed with Celiac disease last April. His mom noticed his belly was chronically bloated and he complained of tummy pain frequently. She had him screened for Celiac disease with a blood test that showed one of his antibodies for Celiac, IgG, was off the charts. He was officially diagnosed when a biopsy of his small intestine confirmed the presence of this autoimmune disorder by showing damage to the villi.

Why is it so Important for People With Celiac to Eat Gluten-Free?

One of the most important things I’ve learned about the gluten free diet, for those whose health truly depends on it (not fad dieters), is that the more frequently they are exposed to the gluten protein, the higher risk they are for triggering the onset of other autoimmune diseases and complications in the future. It’s not like a person with lactose intolerance that can just take some Lactaid to compensate for lactose ingestion. If a person with Celiac disease is exposed to gluten, even via cross-contamination, they risk damage to their small intestine acutely, and autoimmune health issues in their future. It’s a big “oops” to make, which is why I’ve been extremely diligent about ingredient-reading.

I go the extra mile, as should anyone preparing food for someone with Celiac disease, and use separate butter so that I don’t accidentally contaminate his food with bread crumbs. I would have to deep fry anything separately for my nephew because I often fry gluten-containing products in my deep fryer. I make his French toast in a separate frying pan and have tried my hand at some gluten free baking too. Sources for contamination are everywhere; this is something that never crossed my mind when he was first diagnosed.

This is why we often see oat products labeled as gluten-free; they are one of the highest-risk foods to be contaminated by gluten, as they are often harvested using the same machinery as wheat, barley and rye and processed in the same plants. Oats have to be certified gluten-free in order for them to be safely consumed by people with Celiac disease. In order to be certified, oats need to be grown in fields that haven’t grown barely, wheat or rye for at least three years. Farmers who grow certified gluten-free oats need to meticulously clean all equipment that comes into contact with the oats: the combines, grain trucks, augers, bins, etc. 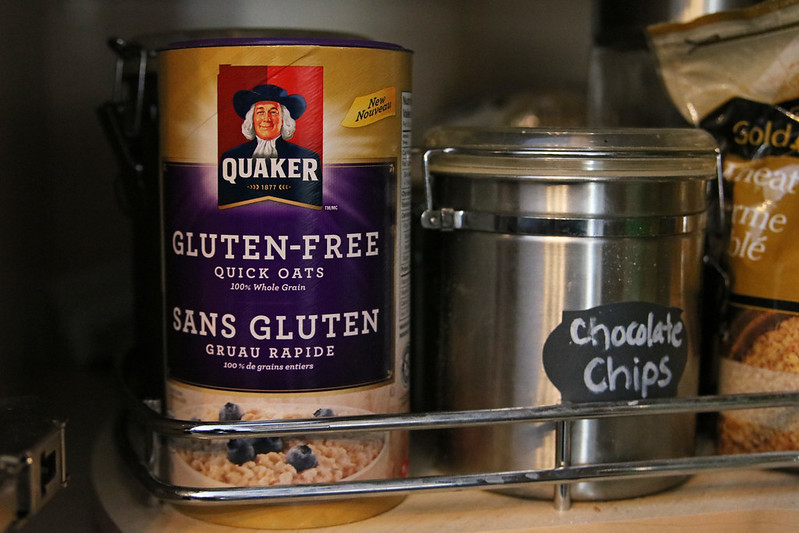 Believe me, I know that heading sounds like a sensationalist scare tactic you might find in an anti-wheat book or website, but there really is gluten in a lot of products and the source of that gluten isn’t always obvious.

Here are just a few of the ingredients to look out for that contain gluten:

I felt absolutely horrible that I made sloppy joes for a harvest meal last year, and after the fact my sister-in-law thought to ask if they had tomato soup in them. Of course, they did! What was wrong with that? Well, the brand of soup I always buy has wheat flour listed as the 4th ingredient – I was completely shocked. It wasn’t even a ‘hidden’ ingredient, but I never thought to look at the ingredients on soup that wasn’t obviously containing gluten like a beef barley soup. Now I know I have to be extremely paranoid, for lack of a better word, about the food I prepare for my nephew especially using sauces, marinades, soups and even broths.

Yes, There Will Still be Overkill With Gluten-Free Labeling

However, before you jump on the gluten-free-label-hating bandwagon, (I was there previously too, I admit!), just take a moment to read the ingredients to see if there actually is gluten and the label is justified. The labels have actually made my life a lot easier learning to shop for the people with Celiac in my family

[…] shopper that way. Since I have to really look at ingredient labels now to shop for my nephews with Celiac disease, I’ve been also looking to see which products are better nutritionally for my family. I will […]

Hey Sarah! Luckily for us Canadians, labelling laws changed a few years ago and now any product in our grocery stores must list gluten or wheat in the ingredients list. Makes it much easier to read labels quickly and know if a product is safe or not!

Yes! Wheat is an allergen and must be listed, but to my knowledge gluten is a protein and doesn't *have* to be listed. For example, in Worcestershire sauce, they use malt barley extract and it doesn't say "contains gluten" on the label anywhere, you'd have to know that malt barley or malt vinegar in some cases, contains gluten. Labeling is getting easier and easier to read in Canada – very thankful for that.

I didn't know this. Thank you, Sarah, for bringing it to our attention. I don't personally know anyone with celiac disease but this is good information to have.

Good points made here Sarah. My daughter was diagnosed celiac 2 years ago at the age of 21. We used to "raise our eyebrows" at those who chose gluten free as a fad diet option. Thought it was silly really. Now, after her diagnosis (made after the biopsy), we are actually grateful to those gluten free fad dieters. It is because of them that gluten free options in pre-packaged sauces, mixes, pastas, and bread products are readily available. Had it not become such a fad, those items would still be difficult to find on the regular grocery shelves. Restaurants have… Read more »

Yes, I absolutely agree. It's just truly a shame that along with the fad dieting comes a lot of myths and fallacies about gluten and wheat. I really am glad there's choices for those who need it!

I love Fastpass photos! 🙌🏻 I have only made

Day 2 was spent riding in cars with boys at Disney