If what we were told when we had our initial consult with our neurosurgeon and the Nurse Practitioner rings true, Jonathan is already done 25% of his helmet therapy! 1 month down and 3 months to go! I’ve always had it in my head that it would be such a great Christmas present to be done before Christmas, but also to not get my hopes up if he requires more therapy than initially thought. If we have come this far, might as well use the helmet(s) to their full potential. 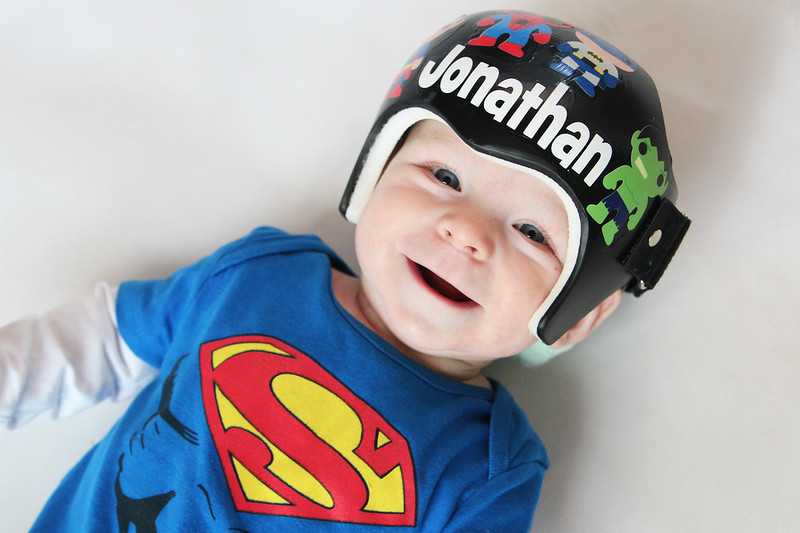 Truth is? Jonathan is doing so amazing in his helmet. It is totally a part of him already, from very early on actually, and I almost don’t recognize him without it on during his daily break! We’ve only had one “hot spot” (a red spot when his helmet comes off from too much pressure), but a quick email and response from his OT at the University of Alberta and some moleskin later, and it was fine. We absolutely love our OT Tania, she’s so awesome to us both and makes the visits fun for us. 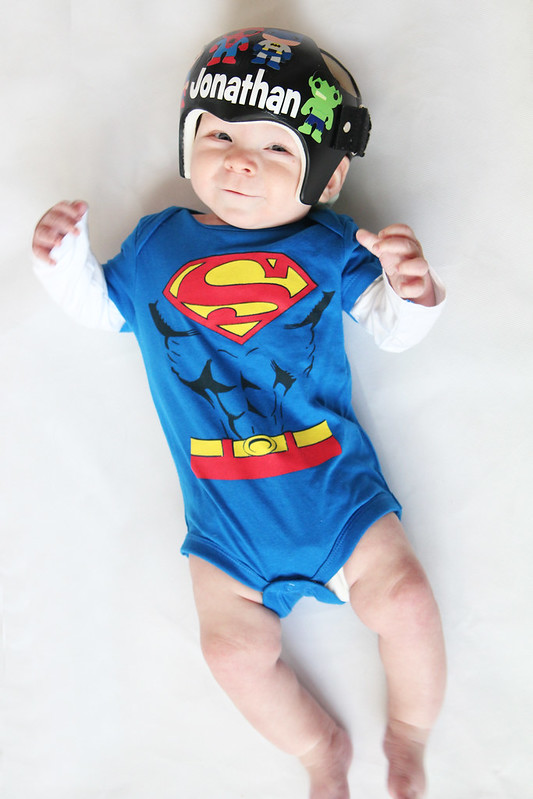 What Happens at Appointments?

I will have to get Jonathan’s pre-op and post-op numbers from the surgeon when we have our next visit at the beginning of October, but Jonathan’s head is already starting to change! His cranial vault index (CVI) was a 76% when he started helmet therapy, and at his 1 month appointment this week he was at 79.6%! The goal, though not always attainable because of genetics, is 85%, according to our NP.

How this was explained to me, is that Charlie Brown has a completely round head – his CVI would be 100%. We don’t want a perfect circle, so decrease that to 85% for a more oval shape and that is the goal. She measures the width and the length of his head and somehow formulates the CVI. I was very pleased that he grew almost 4% since our last appointment; though I am cautioned it is somewhat of an eyeball guesstimate because the measuring tool only goes up by 0.5 cm increments. 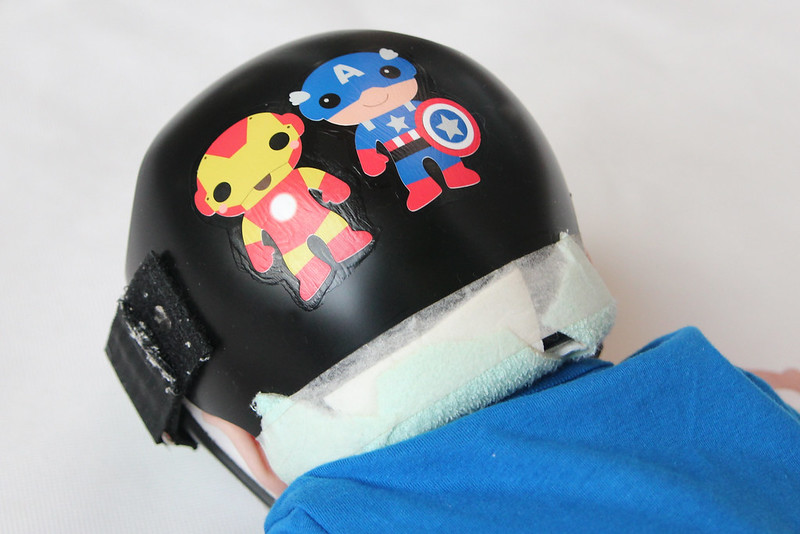 Whose side are you on? 😉 Foam and padding in the back of his helmet to apply pressure so it doesn’t wiggle around as much.

Then padding is added to either prevent growth in that area or to help decrease movement. The foam in the helmet can be shaved away if needed too. We’ve had to use moleskin to prevent rubbing at times and he has the green terryfoam in the back left of his helmet so the back right fills in more and on the very bottom as pictured.

We continue driving to Edmonton every 2 weeks for appointments and just pray that his head keeps growing nicely and that we don’t run into hot spot problems. Since he had a bit of a later appointment this last week at 2pm, I decided to leave the farm at 10 and just do a day trip. It’s so busy with school and harvest right now that I just wanted to be back home the same day. It wasn’t bad at all, but Jonathan didn’t nap very long in his car seat and was so tired; I won’t be doing it again. 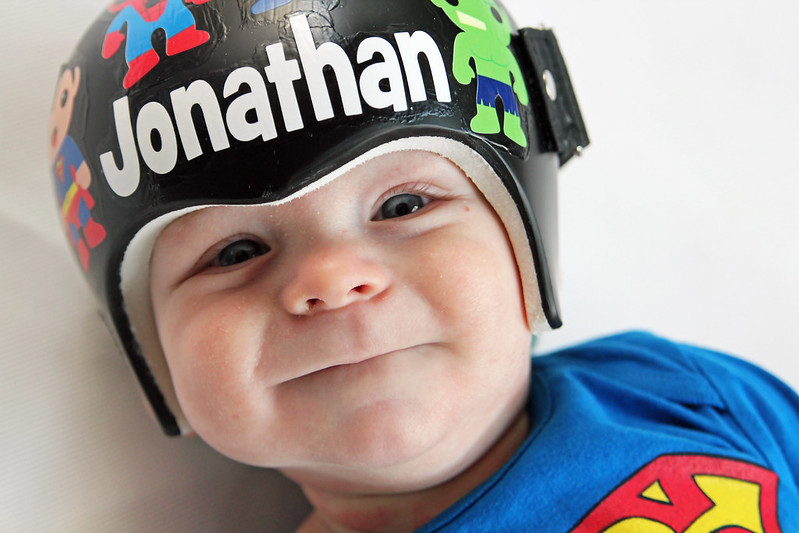 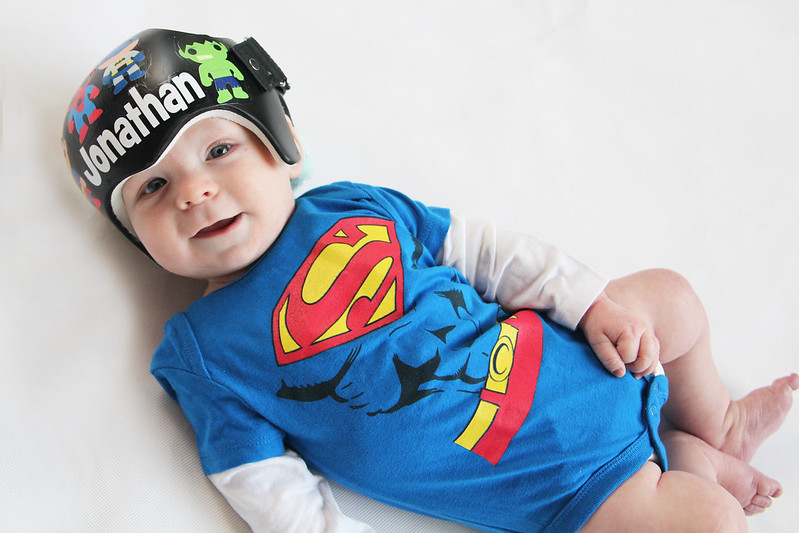 I know he will have growth spurts and then plateau, but I’m hoping our big boy just keeps spurting in hopes that his head will fill out that helmet nicely! He had quite big gaps to fill in the sides of his helmet, and I’ve noticed that, especially on the left, they’re starting to fill in. His head is widening, which we want, and above both of his ears it’s starting to fill out, now we just need growth more towards the top of his head and to fill out the back right, which has always been slightly flat. 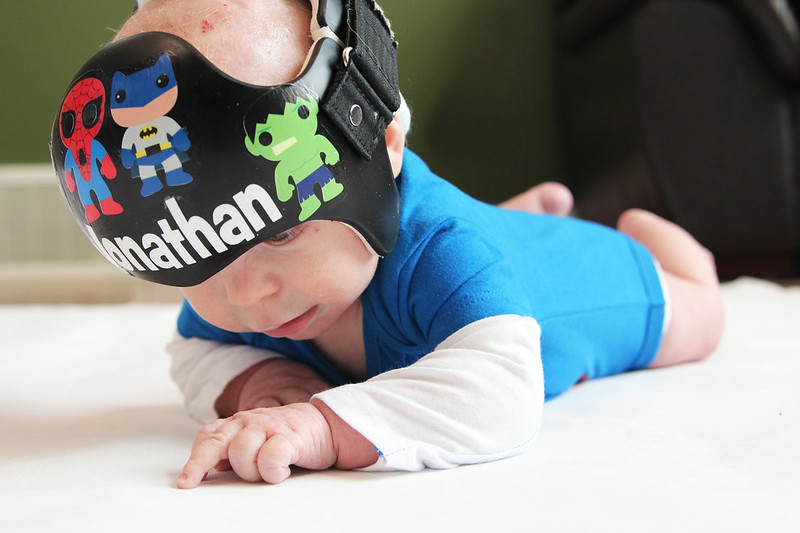 I have really been enjoying decorating his helmet with decals from Bling Your Band. They’re easy to apply and easy to change. As you can see with the close up photos, the coating of Mod Podge that covers them is visible and it isn’t perfect, but I still love it. He gets tons of compliments on his helmets, and I changed it up to superheroes last week because as much as I loved the red tractor…mommy is a bit sick of harvest and wanted a change up! 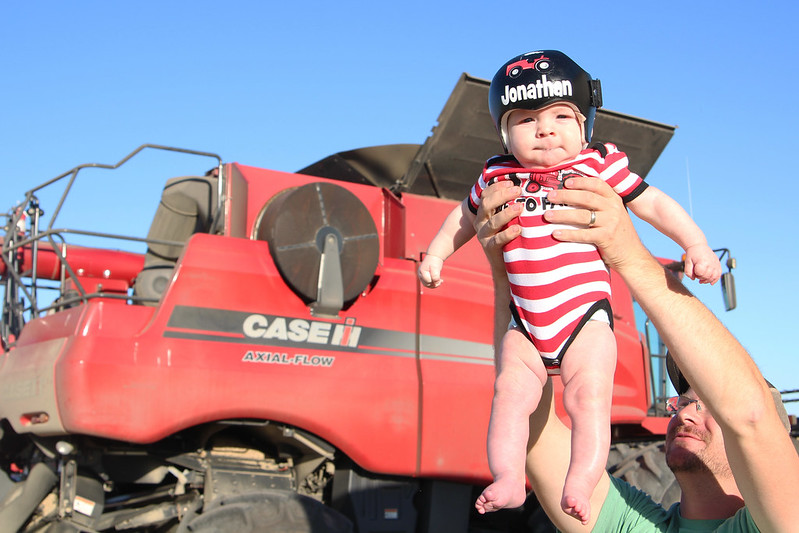 The helmet doesn’t affect his sleep or his personality, it’s just been a balance of finding what to dress him in, especially at night. He doesn’t get profusely sweaty and he’s acclimated to it very well, it took about 3 weeks. Jay installed a ceiling fan this week, as now that the furnace has been going on at night, it gets a bit too hot for him so the fan keeps his room at a nice temperature! We’re battling eczema and cradle cap issues on his scalp, so unfortunately he reaches up and scratches at time. 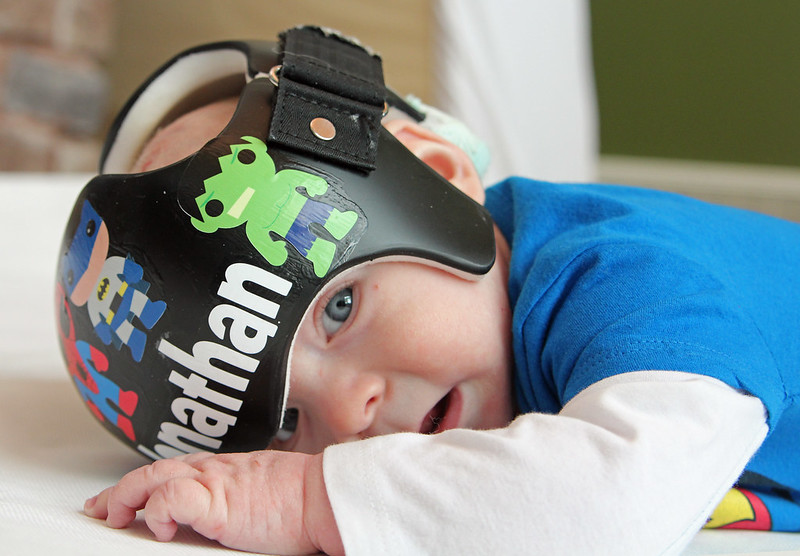 Yes, this post is done and so is the photoshoot, Jonathan 🙂

I’m a first time mum, my little girl was born in August so she is just coming up to 8 weeks. I read your post about your little boy and how everyone kept telling you it was nothing to worry about. I’m worried about my little girl’s head. It looks a normal Shape at the moment and has grown but every visit the health visitors have mentioned her tiny front fontanelle or say they can’t find it all! I did some googling and read about craniosynostosis but when I ask them if I should be worried they say oh no… Read more »

Well good for you to push for a referral! Even if everything is (hopefully) normal, at least you will have peace of mind and know you did the right thing!

He looks so cute in his helmet! He needs some jack o'lantern stickers for Halloween! 😛

Good luck with the helmet! My oldest son Andrew was also in a helmet. He had torticollis and developed a flat spot on the left side of his head and his head compensated by enlarging the right side of his forehead. The photos you posted remind me of those days, Andrew’s helmet twisted to one side also. I hope Jonathan continues to fill out his helmet in all the right places without the dreaded hot spots! And by the way your son is gorgeous!!

Thanks, Jennifer! Yes! His helmet ALWAYS twists no matter how many adjustments they try to make, but they aren't worried. His head is filling out so nicely, his CVI was already at 82% from 76% when we started helmet therapy! Luckily no lasting hot spots and I hope it stays that way!