If I could sum it up in one thought, what life is like so far with Jonathan’s cranial helmet, it would be “not what I expected”. Not necessarily good, not bad — just not what I expected. I was pleasantly surprised when he got his helmet fit that it wasn’t visions of paper mache like I imagined. Luckily for him, with advances in technology it was a stocking fit on his head with a bunch of sensory dots and his head was then scanned with a big blue scanning gun that immediately showed his head shape on the computer. 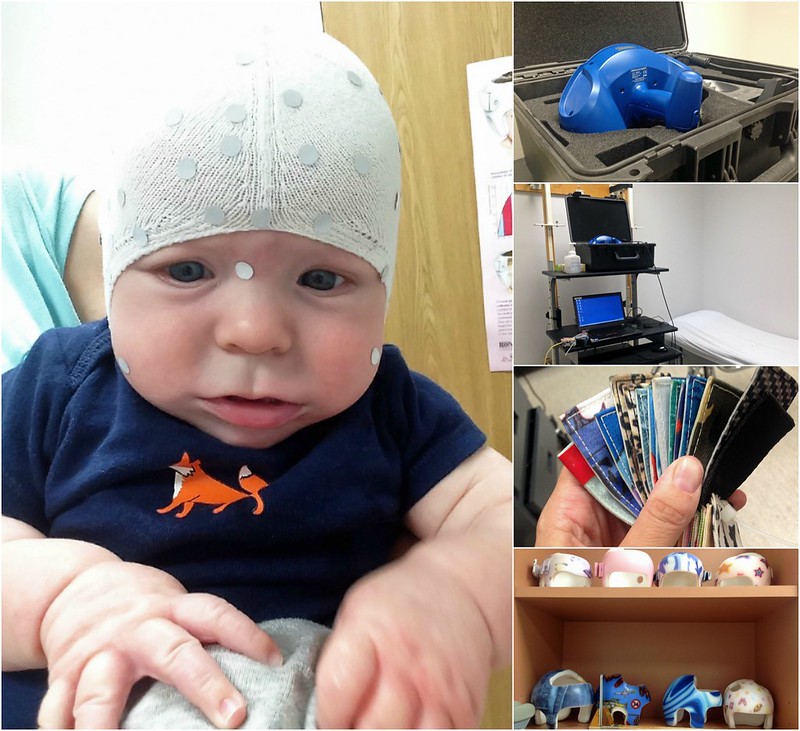 There were also plenty of helmet patterns to choose from and some solid colours. Not as many for boys (as per usual in my boy mom experience), but still plenty. I opted for black as my husband mentioned wanting his helmet to look like a hockey helmet for all the time we’ll be spending in the arenas for big brothers’ hockey this winter! 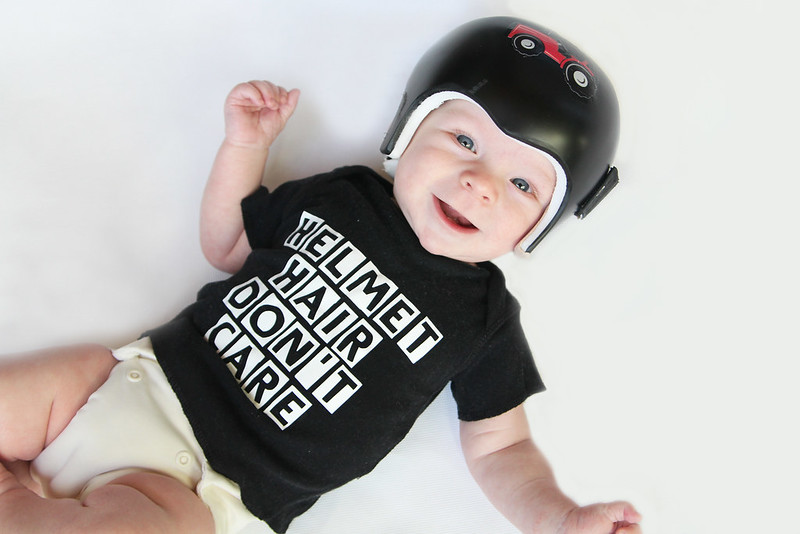 It’s definitely heavier than I thought it would be, but he seems to fair just fine with it and he’ll have an even stronger neck now. 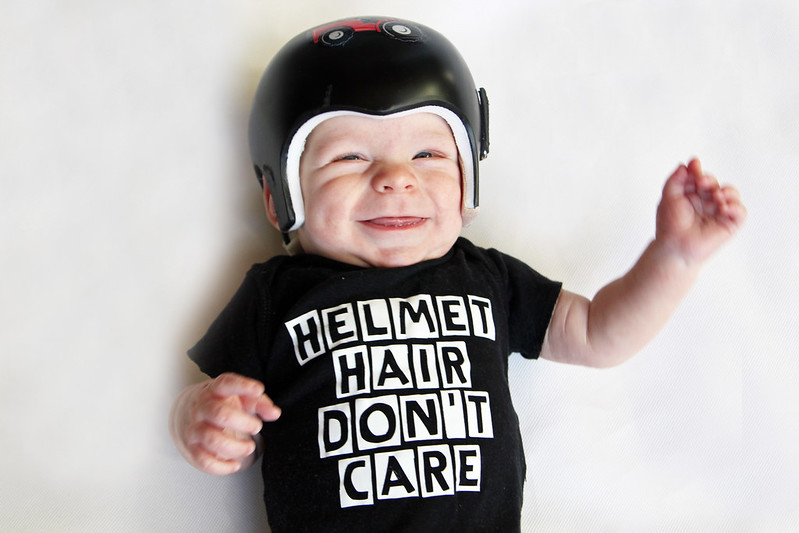 He didn’t even flinch the first few times he had it on, he didn’t even know it was there. I was pretty sure this would be his reaction…but I didn’t want to get my hopes up in case he screamed like I’ve heard some babies do at first. 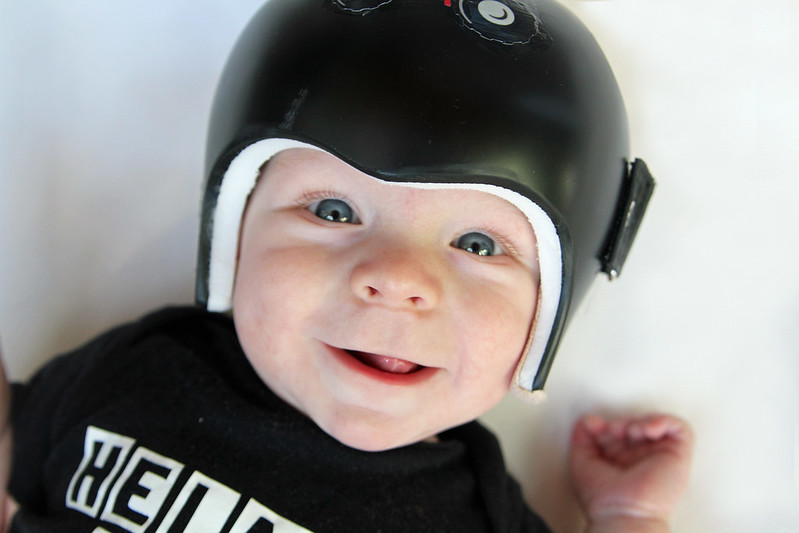 It gets smelly…really fast! So far he hasn’t gotten profusely sweaty, but I’ve kept it cool in the house and in the vehicle. He gets hot at the back of his head, above his neck the most. I was pleasantly surprised that ours is so open on the top to help ventilate and keep him cool.

I was also not expecting it to be so loose, or at least how loose it seems. Since Jonathan was born with sagittal synostosis, his head is narrow and long, so it needs to grow wide to get the proper head shape. It’s fitted well in the front and the back, and quite open on the sides so it can fill out, but still has quite a lot of wiggle room. Our OT/orthotist said that it was probably “extra big” because we’re from out of town and will have a longer time to fill out this helmet and that it’s not supposed to be like a vice (which I honestly thought it might be!). 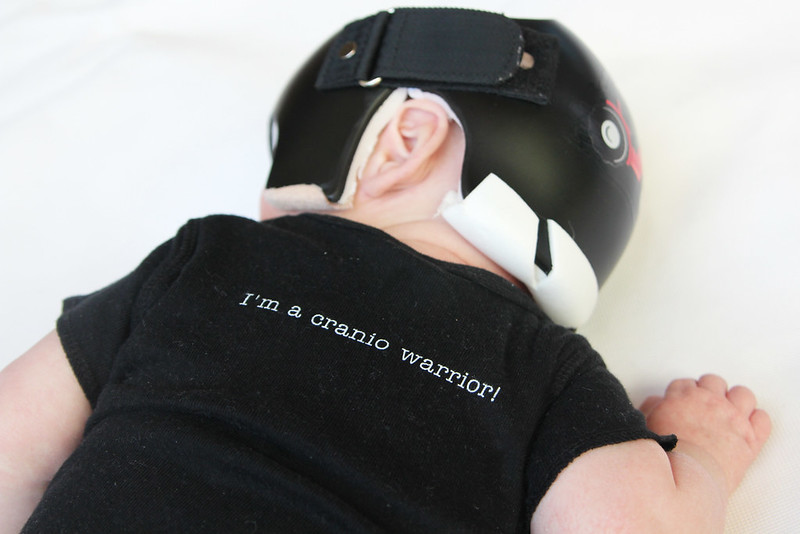 He has to be wearing it 23 hours a day already after the first 2 days; I thought it would be a slower easing in process. In true Jonathan fashion, he handled it well and I’m praising God that we don’t have any hot spots causing him problems.

I miss snuggling and kissing and smelling his head. I knew I would, and this has been (by far) the hardest adjustment for me. I also miss just the feeling of his head in the crook of my arm when we nurse. Now we’re both adjusting to a big, hard helmet. Using The Nursie pillow has saved my arm and been so helpful. 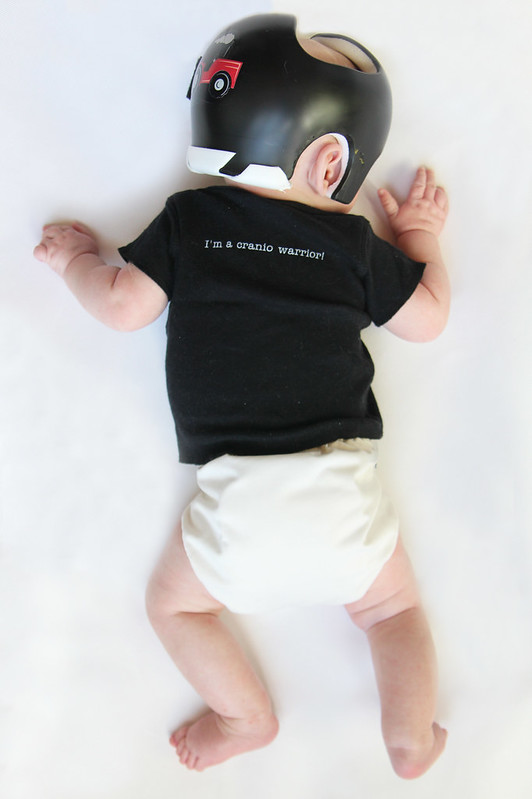 This brings me to my last point: not to take away from anything our brave little cranio warrior has and is going through, but I truly think it’s harder on us as parents, than him! I was pretty emotional about it the first day and a half and teared up two nights ago as I smothered his head in kisses during his daily 1 hour helmet break, but he truly does.not.care.one.bit about that helmet. He definitely touches his helmet and feels around for it as he is exploring more and more of his surroundings in general, but he’s never tugged at it and cried or screamed or anything like that. 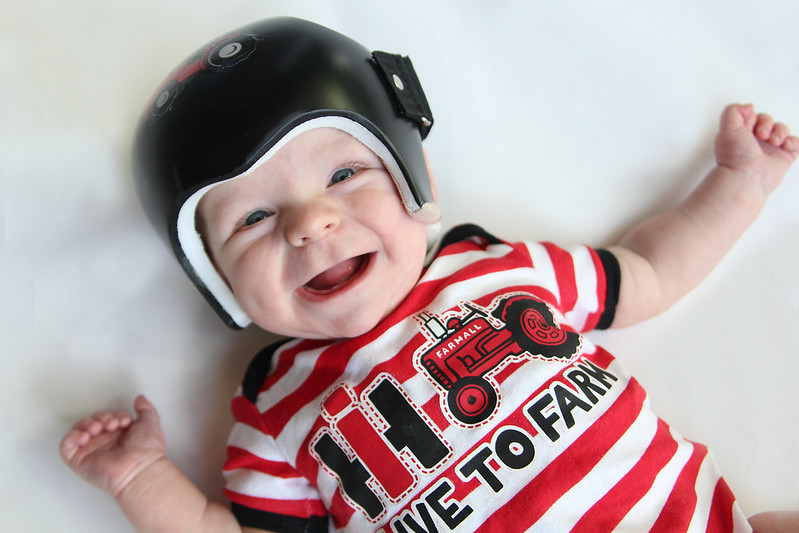 He gets normal red spots when I take it off to check, depending on where he’s been sleeping, and that’s perfectly fine because they disappear well within an hour. I clean it with diluted isopropyl alcohol during his daily break and give him a bath during that time too. What’s helping my emotional hurdle is how we’ll get to decorate it. I chose a black helmet for his first helmet and we’ve started off with a harvest theme — red tractors, of course! Just waiting on his white name decal, as I ordered a set before he was fitted for his helmet and the decals are black! 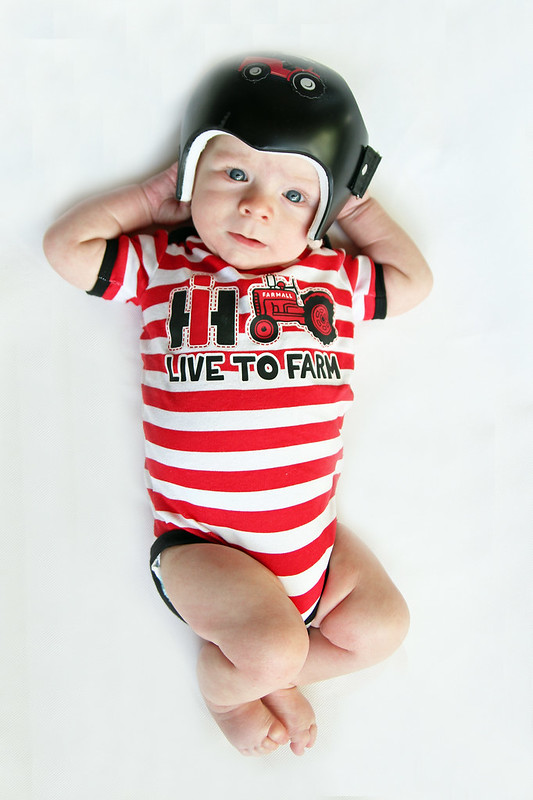 Life at Home So Far

The first night he was a bit hard to put down but then slept for 6 hours. I don’t want to say “only” 6 hours, because it seems like a lot, but for Jonathan that’s about 1/2 the sleep he usually gets at night and he pretty much only sleeps at night! He was up for the day, had a 2 hour nap on my lap, and then just cat napped. He was so tired that for the 2nd night he let me put him down and he didn’t even move. He then stirred after 3 hours, but settled himself and woke up an hour later. It took me over an hour to feed him and put him down, but then he slept 6 hours and then had a 3.5 hour nap right after that. I even got to put him in his crib for that nap and clean my house and catch up on laundry and edit these photos!

As I’m finishing up writing this post he has slept through night #3 and is still sleeping, and I put him down with no effort last night. He’s such an amazing little man and he’s taught me so much in his short (almost) 4 months of life! Right now we will be going back to Edmonton every 2 weeks for helmet adjustments. I pray that we don’t have to go back more frequently and that we don’t have too many hurdles.

Thank you for following along and for all the well wishes on Jonathan’s Cranio Journey on Facebook. This post contains 1 affiliate link and I got his decals from Bling Your Band.

Our little grandson Shadrach is scheduled to have the very same surgery in Edmonton this coming Tuesday. His CVI is 67%. He’s only 7 weeks old. God is so good and He will see us through. You have enlightened this dark valley for our daughter Shiloh and her family. Thank you for sharing your journey. It has given us hope and encouragement

This makes me so happy and I’m sorry for the late response. Hoping it all went well, over 2 months later!

[…] the biggest change this month is the helmet. He’s handling it so awesome, it’s a part of him now. Just last night during his hourly […]

He is SUCH a cutie! Glad he is adjusting well!

Love the helmet and both shirts! Tell Jonathan he’s rocking the helmet and that you are too Mama! Thanks for sharing about both of your journeys. I have seen more and more babies that have had to get helmets in the last five years. I don’t know if that’s because I’m aware of and tuned in to “baby life” more or because there is more technology and diagnosis now. Either way, I feel more people are better understanding and informed about cranial issues.

so glad to hear how well Jonathon is adjusting – God is good!!

He absolutely is. I was having a teary moment (though Jonathan certainly wasn't!) when I got back to our vehicle in the parking lot at the hospital just how overwhelming it all seemed with the helmet, and the song "O My Soul (10,000 Reasons)" came on the radio and that was a song God spoke to my heart and during pregnancy, it's a song I listened to when I labored with him too, so I knew it was going to be okay.