My 4th generation farmer husband jokingly tweeted that we were going to be growing Cadbury Mini Eggs on the farm this year because our yellow peas were beautiful blue, pink and purple pastel colours that also accompany the delicious chocolate candies. But wait a second—if we are growing yellow peas, then why are they blue, pink and purple? Well, let me tell you why! 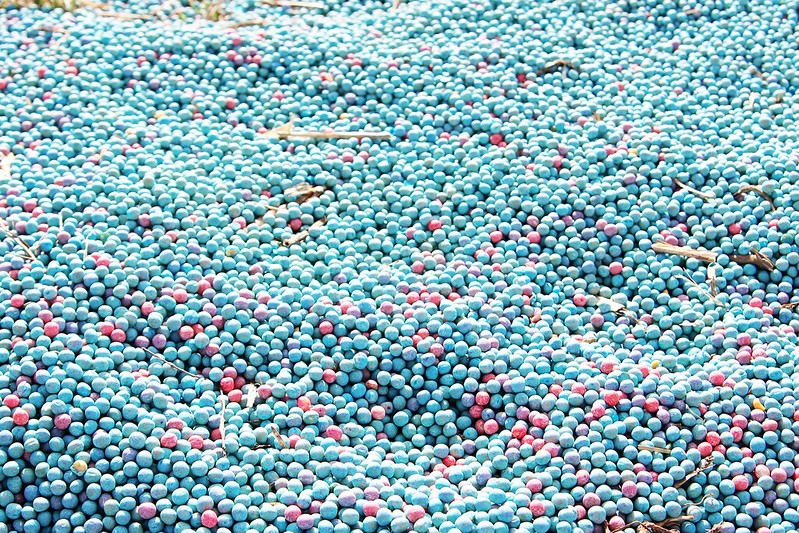 What Are Seed Treatments?

Simply put, seed treating is the act of applying a product (pesticide) to the seed and there are a number of seed treatment types. Simon Ellis, a farmer and pedigreed seed grower from Manitoba not only uses treated seed on his farm, but he has a seed business that sells and treats seed as well. Pesticide seed treatments include fungicide or insecticide, or a combination of the two. Fungicides control diseases that affect seedling plants, and insecticides control insects like wire worms, flea beetles, or cutworms, that attack and eat seedling plants. Most pesticide seed treatment last between 14 and 30 days. At this point the pesticide has broken down and is no longer controlling the pests. Another type of treatment is for nutrients or fertilizers. They are less common, but if a crop responds to micronutrients like zinc, this is a good way to give the plant that nutrient. Bacteria treatments known as inoculants are another seed treatment that helps promote plant growth or stimulate nutrient development. Simon chooses to treat seed to help keep his crop healthy, disease free, and to produce the best quality food possible.

According to the Government of Saskatchewan, fungicide seed treatments protect seed viability and inhibit the invasion of fungal pathogens causing seed rot and seedling blight. They work to protect the seed twofold: to control fungal pathogens on or in the seed and controlling fungal pathogens present in the soil. Seed treatment ensures that the crop gets off to a good start and are not a new concept at all.

Why is the Seed Coloured?

Pesticide seed treatments come in bright colours, so they can be easily identified and kept out of the food system for humans and the feed system for animals. The peas pictured above that our farm purchased from Stamp Seeds are colourful because they may have had a cereal (wheat, barley, etc.) treat which is usually red in their system prior to the pulse (peas, soybeans, etc.) treat which is usually blue and some mixing gives a purple color on the first few seeds, which was explained to me by Greg Stamp. PMRA (Pest Management Regulatory Agency) studies and will licence seed pesticides if they are deemed safe and effective in Canada and the EPA does the same in the United States.

Do All Farmers Treat Their Seeds?

I conducted a survey and out of the 83 farmers that responded, 4.8% do not use seed treatment and 95.2% do. Some farmers manage soil borne disease without seed treatment and rely on crop rotation, intercropping, higher seeding rates, good seed technology, variety selection and paying attention to nature. Some reasons cited were the desire to see genetic resistance built into the seeds rather than chemical resistance applied on the seed. One farmer said seed treatments are expensive and it’s just as effective for him to plant more seed.

Some do not treat but put themselves at risk for diseases or pests, another farmer stated. Some years could be fine without seed treatment, but it only takes one bad year to cause a big problem that could have been prevented with a treatment. This isn’t what the majority of farmers feel or practice, but it’s wonderful for farmers to have all of these choices.

What are the Alternatives to Seed Treatment?

Seed treatments are used to protect the seeds from fungus and/or insects, so if seed treatments are not used it leaves a crop susceptible to disease and insects and the potential to use more foliar fungicides and insecticides (spraying above ground). I spoke with Gregory Sekulic, an agronomy specialist with the Canola Council of Canada, and he told me that insects consume about $300 million dollars’ worth of canola every year, and they don’t just go into a field and eat a very small amount of the yield, they destroy whole fields very quickly. His record for losing an entire crop is 36 hours. One morning the crop was healthy, with just a few beetle bites, but by the next evening it was close to a disaster. I also spoke with an entomologist and they confirmed that for our region in Alberta that a good management plan for wireworms, flea beetles and pea leaf weevils is seed treatment. It is essential, the best way to deal with them, and is a vital part of a the production system.

Flea beetle damage on canola; they consume ~$300 million worth of canola in Canada annually. Photo used with permission from Gregory Sekulic

Even with treatment, nearly one million acres of canola are sprayed with an insecticide for flea beetle, annually. Gregory explained that this is because when populations are high, the beetles will collectively eat a crop while dying from the seed treatment. If each beetle needs several bites of crop to ingest enough insecticide to be killed, imagine how many beetles are required to eat an entire field, despite the treatment!

Technically most seed treatment is used prophylactically, but the alternate can be a gamble that could cost a farmer all of their potential crop income. Gregory says he’s convinced we prevent millions of acres of foliar application of insecticide because of this seed treatment. Alternately, he wonders if we can imagine the impact on the ground beetles and beneficial insects in the fields when crops are sprayed with insecticides? He says, in essence, there are three management strategies:

The only reliable one is seed treatment, which is why all canola seed sold in Canada has a seed treatment. The fungicide is absolutely imperative.

Sarah Foster of 20/20 Seed Labs adds onto this by saying that alternatives would be to implement a robust crop rotation plan if not using a treatment. Also by making sure the seed has very strong germination and vigour, because seed is planted into cold soils in our growing region. She also agrees that treatment is an important part of good management practices.

What Do the Farmers Say?

I conducted a survey and asked farmers a few questions. One of them was what crops they use seed treatments on and the top responses were wheat, canola, soybeans, corn, barley, sunflowers and more. Another question I posed was: “What is the main reason you use seed treatments and/or inoculants on your farm?” and this is what they said:

As you can see, the majority of farmers choose seed treatments to protect their seeds from soil borne diseases and from insects/pests. They want to give their seeds the best chance at survival at the most delicate and vulnerable stage of their lives. Crop vigour (a measure of seed germination when a seed is placed in less-than-ideal circumstances such as cold-temperature soils) and protection, yield protection and advantage, and lower insecticide use (if any at all) were also reasons that were brought up again and again in my farmer survey. There’s only one shot to get it right and there’s not a lot of opportunity to correct a mistake. It’s a form of insurance on your crops, was another response that came up multiple times.

A big thank you to all the farmers who voluntarily took the time to answer my survey about seed treatments and to the farmers, the agronomist and entomologist I emailed/talked to. This is just scratching the surface of seed treatments and I truly appreciate the knowledge that farmers have the the tough decisions they have to make throughout their growing seasons.

[…] that are resistant to many of the most damaging crop diseases. Farmers may also choose different seed treatments for protection of the seeds from known insects and fungi. Using resistant varieties and seed […]

I might add that some seed treatments protect against disease organisms that are already on or in the seed. Smut diseases of wheat are a prime example.

Thank you for the comment, Ben! I think that was a comment Sarah Foster made to me too: treat the ailment with the "prescription" of seed treatment.

Guest
Julia at Home on 129 Acres

Thanks for this really detailed post. We love our farm, but we have no background in farming. We rely on our tenant farmer to manage our fields and make most of the decisions about the best stewardship of the land. Last year, when we had our first crop of soybeans, I was surprised to see that the seeds were bright turquoise. I figured they were treated in some way, but now I understand why. As we come into our fourth year on the farm, I’m trying to learn more about the right questions to ask our farmer. This post is… Read more »

Thank you Sarah! I think you really gave an in-depth, insightful look at our colored (or coloured) seeds. 🙂 This is relevant and true on our ND farms just south of the border too. Crop vigor is vital in our northern climate and when you said "There’s only one shot to get it right and there’s not a lot of opportunity to correct a mistake. It’s a form of insurance on your crops.." I said YES. Glad farmers have choices like this to give all a better chance at success.
My recent post I Am Not Taking My Computer On Vacation

Hi Sarah! This is really interesting, thanks for putting it together! Sounds like seed treatment confers a number of advantages, but you do mention a disadvantage: "For our farm, and other no-till farms, a disadvantage of seed treatments is a build up of disease in the soil because of the residue which can spread to the developing crop."
It sounds as though the seed treatment remains in some form, and that this leads to disease. Could you please explain this further? Thanks!

Excellent question and that point was brought up by my husband and by Sarah Foster (linked in this article). I will try to get them to come here and comment further, but my husband is very busy seeding right now, just give him a bit of time 😉

If you haven’t put @visit.banff and The Rocky Mo

Time for a pupdate! Barron is 14 weeks old and thi