Why can’t we just respect each other when we disagree on something? What happened to basic human decency? Why must we resort to school playground tendencies of name-calling and bullying? As an adult, you have free will to exercise how you treat people, so I hope you choose to treat people with respect as you’d want to be treated.

I understand that as a blogger I’m putting myself in the public eye for scrutiny and criticism. I also know that the more my readership grows and the more my posts are shared is correlated with the amount of scrutiny and criticism I receive. When my interview for The Western Producer was shared, somehow it got into the hands of Dr. William Davis, the author of the book “The Wheat Belly”. I’ve talked about his book a few times and I don’t regret anything I’ve said of it. In the interview regarding why I am trying to share information about wheat and gluten, I am quoted saying:

I wanted to shed light that you don’t have to cut out entire food groups because you heard from the Wheat Belly book that gluten is toxic.”

It was an example of many of the defamatory statements made about wheat and gluten in the media, and perhaps Dr. Davis didn’t write that specifically about gluten in his book, but he has certainly said that wheat is a “perfect, chronic poison”.

It was pointed out to me on Twitter that I was on the doctor’s radar as he tweeted this:

An odd twist: Nurse and farmer's wife blogs about why and how genetically-modified foods, wheat, and grains are… http://t.co/zK5GMTUtpX

Curious, I went over to Dr. Wheat Belly’s Facebook page to see what he said, and I found this:

I was extremely livid and asked him kindly to elaborate on his statement, asked him what the “odd twist” was, and to this day he has not given me that courtesy. It must be nice to state to your audience of almost 214 000 that if kindness doesn’t kill me then “the GM foods and grains will”.

I posted about it on my Facebook page and rallied the troops. People were saying awful things about me in support of his post, so quite frankly, I felt the need to defend myself.

I have never said anything about this man that wasn’t something he said first and I have certainly never attacked his character, until now. I believe his book is cherry-picked science and is an attack on wheat and grains that is unwarranted and not evidence-based. He calls modern wheat “Frankengrain” because he believes it has ‘changed so much’. Guess what? It hasn’t. 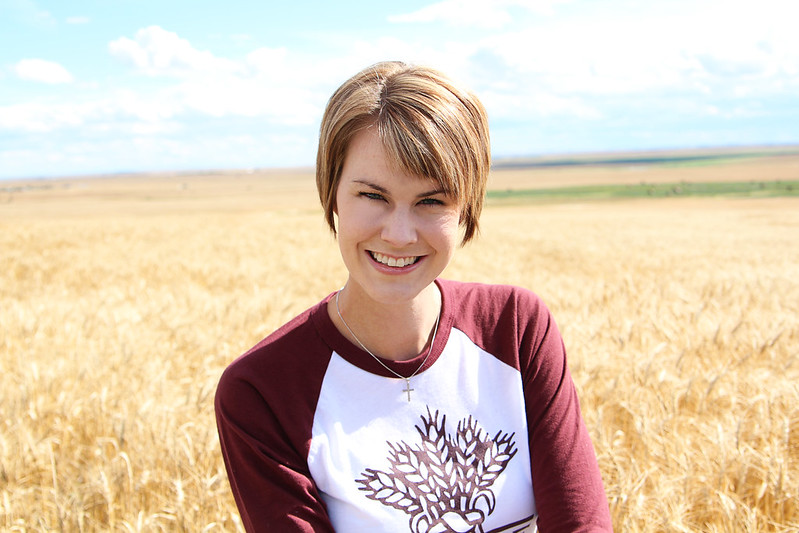 The goal of this blog has always been to alleviate fears about agriculture and food through education, evidence-based research and from our personal farm experiences. That is it. I don’t go around the internet touting “Wheat is awesome! Eat more wheat! Wheat makes you smart! Wheat will help you lose weight!” I don’t care what you eat, I really don’t. What I do care about is when you spread fear and lies about foods that are perfectly fine for the majority of the population to eat.

If you have gone wheat-free and have lost weight and it’s changed your life—I think that’s great. Good for you! I’m not going to argue that, but please don’t come to me and try to “convert” me to your diet, it’s a very elitist way of thinking. (That goes for all diets too!). Go Kaleo said it better than I ever could:

Eating the ‘right’ way (organic, clean, paleo, vegan, whatever the diet du jour is) is equated with moral superiority. This isn’t a healthy way of thinking about food. It’s actually disordered. A person with an eating disorder has tied their identity to their food choices. When they eat the right way they are good. When they eat the wrong way they are bad. Fixating on what other people eat is also disordered, as is judging a person good or bad based on their food choices. This is too much power and morality associated with food choices.”

I am still dealing with “wheat bullies” from Davis’ page on my blog’s Facebook page. I have banned more people from my page last week that I have in the entire page’s existence because I cannot stand the back and forth he-said-she-said BS that comes with it! I strive to keep my online spaces open for commentary from all people, but I’m going to be more stringent on what I allow in the comments. I don’t want them flooded with disrespectful and crude comments and false information.

I leave you with this, as I believe it with my whole heart. Be kind to one another, especially online when it’s so easy to hind behind a keyboard and screen.

I know this post is old, but I wanted to say that I’m glad to see a voice of reason going against the Wheat Belly cult. I have many friends and relatives who think gluten is responsible for this ailment or that body ache, and over the years I have become a fervent supporter of actual diagnosis by real medical staff. It makes my blood boil when someone suggests restricting specific food groups in one’s diet because “I read it in a book.” The wheat belly Facebook page also recently published weight loss before and after pictures of a woman… Read more »

No, I Will Not Promote Your Anti-Wheat Documentary - Nurse Loves Farmer

[…] should not seek advice from a cardiologist about wheat, as I’ve mentioned before, […]

Hi Sarah, I have to be honest, your support of GMO's and modern grains comes as a surprise to me. There are many, many blogs out there who support non GMO and heritage grains, but this is the first one I've seen that supports the opposite view point. I myself am not a support of GMO's or conventional agriculture, I farm organically. But you make a good point that we do not need to be throwing stones at each other just because our viewpoints are different. Everyone is entitled to their own opinion and life choices. Thank you for sharing.… Read more »

Hi Nicole, I'm curious as to why my support of GMOs and modern grains comes as a surprise to you? Actually, the reason why I started blogging about this stuff is because so many blogs are anti-GMO and anti-modern agriculture. I'm also curious as to why you are against conventional agriculture? When only 2% of farms are organic….how is that possibly a solution to feeding the world? I think we need diversity in agriculture, including organic, including urban farming…but there is not "one" solution (including only conventional/only GMOs). Anyway, thanks for reading and for the respectful comment and I hope… Read more »

I'm new to your blog, but here to stay. I've added it to my favorites. I support you 100 per cent. I love the way you present things in a clear concise intelligent way. No bashing, just facts. Being a farmer myself….corn and soybeans in Nebraska, I am well aware of all the misconceptions about GMO's. Thank you for doing so much to get proper information out there and help dispel all the misinformation.

Thanks for your kind words, Renee! Welcom!

Thanks for all you do Sarah. Farmers know more about food production than most people on the planet and it is very important they relay that good information to the public that has lost contact and understanding of where their food comes from.

I wonder what this industry has to do to gain public trust? I'm sure that most people (if polled) would trust farmers and the agriculture industry, but that minority that doesn't sure is loud and abrasive about it!

Report his page to FB for harassment, give us a link so we can do that also. If you get any death threats or threats against you farm, report them to FB, your local police and if you can the police where the threat comes from.

Thank you, Cairenn! I will! I reported his page and the post: https://www.facebook.com/OfficialWheatBelly/posts…

As an ag educator and farmer, I want to thank you for sharing the truth about american agriculture. Hang in there.

And Canadian! 😉 Thanks, Steve!

I'm a new reader here because of your post on wheat. I am with you 100% – You have chosen the moral high road, and should be proud of yourself. Your posts remind me of Sue Becker's – and if you haven't read her post about Wheat Belly, you really should. It's on the Bread Beckers website. 🙂
My recent post 100 Days of Christmas Gifts $25 or Less (Day 64-70)

I think I have, but I will definitely check it out. Thanks so much for reading and for the kind words, Stacy!

Thanks for the support and the nice email, Trent!

This error message is only visible to WordPress admins