I had a major week of milestones last week. I was interviewed for part of an article that I know appeared in the Calgary Herald, Edmonton Journal and Regina Leader-Post (that I’ve heard of). That lead to an interview on CBC Radio One’s Eyeopener show with David Gray and another radio interview on 770 AM with Bruce Kenyon talking about the gluten-free trend and wheat farmers. Another huge milestone was heading out to my first ever blogging conference—the Food Bloggers of Canada Conference held in Vancouver this past weekend. These milestones started me off feeling higher than high not only being featured in the paper, but that a national radio station based in Calgary would seek me out for an interview after they read about me in the paper. I felt like what I said mattered, and this time it was to an audience that reached across western Canada, not just on my blog and whoever happens to share it.

These milestones also left me feeling the lowest of lows and physically ill to the point of feeling anxious enough of not being able to take a deep breath and on the verge of a small panic attack. I also felt nauseous and wanting to vomit at various points this past weekend, in particular any time my phone told me I had a new email.

Why is it that for all the good feedback I get (which is a lot, and thanks for that!) I find myself vulnerable and focusing only on the bad? I have never had so many hate emails than from the gluten interview. I guess the bigger the reach the more that will pop out of the wood works, and normally I can keep calm and just take the negativity with a grain of salt, but with the anxiety I had about going to the conference, I felt myself on the verge of losing it.

I had a wonderful time meeting new people, networking with some of our country’s agriculture groups of whom a lot came up and told me they were fans of my blog and what I write about in agriculture. Then I also met some people (which I knew would happen) that were not such fans of the things I write about. I had an exchange with someone on the last morning of the conference about canola oil and it ended with this person walking away saying “you’re never going to change my mind about GMOs“.

The thing is, I don’t want to change minds. Well, I do…but I want to do it by respectfully providing science-based information so that it might get my ‘opponents’ at least thinking about things. I excitedly told this person in a “did you know” tone, that the neat thing about GMO canola is that if you had 3 samples of canola oil side-by-side: 1 organic canola oil (if it existed), 1 non-GMO canola oil and 1 GMO canola oil, it is all exactly the same. The “GMO” (just one gene) is a protein the canola plant which removed in processing (along with all proteins) and they are all the same—there is no way possible to tell which is which once they are processed, same goes for sugar. This person wasn’t interested in learning and that’s fine. 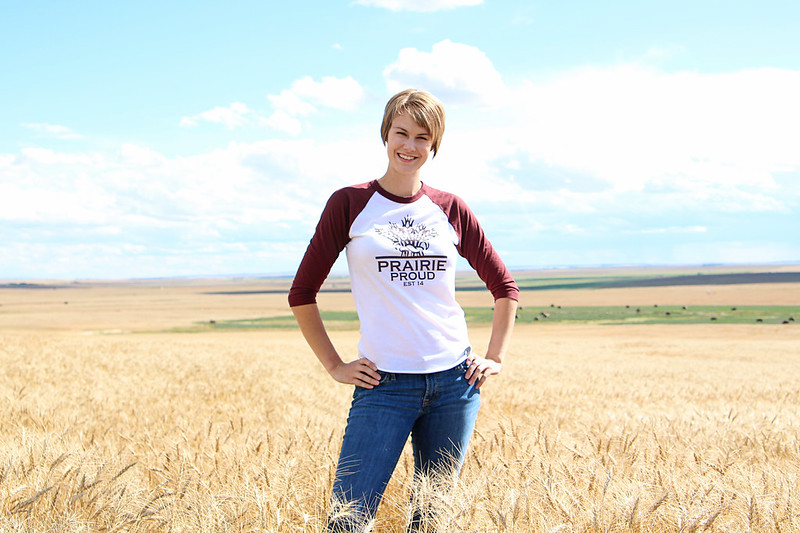 Call me an ag nerd, but I think facts like that are SO COOL and so many people don’t know things like this and I want to share it with them. I think it puts these controversial things into perspective and makes things less scary. But if someone wants to put their hands up and walk away, that’s their choice. If they want to pay more for a product based on fear and not science—also their choice.

I did have a pleasant exchange with an organic wine grower who openly admitted that the problem with the “debate” in GMOs is that the organic proponents are “too emotional and irrational” in their arguments and that its “hard to argue with science that’s reasoned”.

When advocating for agriculture, be it gluten in wheat or GMOs, I use the facts that I know and I add a personal twist when I can. One of my favourite things about talking face-to-face with people was seeing their reactions to thing things I was telling them. I told the organic wine grower that GMOs aren’t a “thing” inserted into a corn cob with a syringe like we see on Facebook all the time, rather it’s a technology that farmers can and do use: it’s a tool in the toolbox. Why should farmers be limited in using a technology that has been proven time and time again to be safe?

I love what I do, I put countless hours into researching my posts all for free because I love it so much. Usually it just grinds my gears when people email me or comment telling me that what we are growing is “poison” and give me stats and “facts” from unreliable sources, but in moments of vulnerability, I let it get the best of me. Hopefully it won’t (almost) make me sick next time!

I just saw this post today. So glad you're still writing and advocating for agriculture despite the naysayers. We need positive people like you willing and ready to lead with the facts and share personal stories as well.

I'm definitely taking a step back to enjoy the summer with my family, but this still rings very true at times!

I totally understand what it's like to focus on the small amount of negativity even when you're getting a lot of positive feedback, and it stinks, but you've got science and logic on your side so try not to let the "haters" get you down! I'm not going to claim to have any expertise when it comes to GMOs, but I do know that canola itself is not a naturally occurring plant – it was created at the University of Manitoba from breeding rapeseed plants until they got an organism that could produce oil fit for human consumption (aka canola).… Read more »

You know, what? You bring up a REALLY valid point about canola period. It wouldn't exist in nature without scientists, labs and researchers—it wasn't created by "GMO" but later on the RoundUp Ready traits were introduced. Thanks so much for your comment!

Sarah, what a week! I knew you had this food blogger conference coming up and had thought of you. Add in the all the media interviews and it was a huge week. Keep your high head and telling your stories with the great research you put into them. You rock!
My recent post An Equal Parenting Story: 6 Reasons to Vote No on Measure 6 in North Dakota

Thank you so much for this post. You have no idea what it meant to me today. I posted a rather personal/controversial article on Sunday and the nasty comments have flooded my inbox for the past 48 hours. I thought I was the only one that felt physically ill dealing with the negativity. I know there are tons of positives out there, yet the negatives still sucker punch me. Your post dropping into my email in the middle of all the ugly was a godsend. Thanks!

Ugh isn't it an awful feeling!? As much as I *know* this to be true, it's not always easy to remember: we have to think of the people that are "on the fence" or so as I recently heard regarding these controversial topics in agriculture, the "mushy middle". THOSE are the people we will reach! Take a break when you need and then get back out there. Come and find me if I can help in any way, it helps to have supporters tackle these things!

Chiming in with some positive feedback! I love your agriculture posts, I cheer for the side of science and reason whenever I read them.

Thanks for the encouragement, Jennifer!

Not everyone can do what you do Sarah! Even from the short time talking to you on Saturday – I can see how passionate you are – don't stop and let the haters hate. You are doing an amazing job agvocating and just being you.

Thanks, Alisha! Absolutely loved meeting you!

If it was easy everyone would do it! Agriculture needs people like you Sarah. I have had face to face confrontations with friends about the gluten issue, it is a big one to tackle. You did it very well!
My recent post Got Questions? We Have Answers!

Thanks so much, normally I'm fine but it was just a bad equation from the get-go!

Sarah it was an absolute pleasure meeting you! You have been blessed with the ability to make people feel welcome into the conversations while providing information. Keep doing that sister
My recent post 5 Exercise Tips for Beginners

Julie, I absolutely loved meeting you, I've always wanted to and I'm glad we did!

De-lurking to add to the positive feedback – thank you for what you're doing – and to echo the above comments. It does take courage to stand up for reality, and you've got it 🙂

What you do is amazing. It takes great courage to put yourself out there, be a voice for farmers, stand up for science and have conversations with those that have opposing opinions. Be proud, rely on your supports when you need us and know that we've got your back because we must #StandUp4Science united as one. Most importantly YOU must come first. Take care of yourself, take a time-out when you need it and recharge to be the best you that you can be!

Chin up buttercup! You are AWESOME!! As another Alberta farm wife and mom, you have become my "go to"! Often you answer the questions I am asking myself, before I have the chance to do the research. Keep up the great work! It is always unfortunate when you try to educate someone who isn't interested in the facts….. Unfortunately it seems our industry is continually under fire and the best most of us can do is educate ourselves and our family. Keep up the great work Sarah!

Take it as a pat on the back!
No one attacks people that aren't influential!

Thanks, Ben. Normally I'm fine, it was just a bad equation for me to feel so physically blech!

You are doing a great job, keep up the good work!