If any of you are regular friends or followers of mine on here, Facebook, Twitter, or Instagram you might have noticed that I’ve not really been around that much. That all started on Sunday night when Ethan had a stomach bug. I’ve never had to stay up with a sick kid in my 4 years and 4 months of parenting, so I guess I was due. I was up for 3 hours while my little man puked every 15 minutes, and that’s a generous time estimate. It started off in his crib, and he’s done that before—had a one-time-only “woofing of the cookies” and then he’d be done with it. Braden’s always been like this too. So, Ethan was asking for “tractors” and we brought him to our room to watch tractors on YouTube, assuming he’d settle after awhile and go back to sleep. Well, I was wrong and the price I paid was washing our bedding (which he puked on twice) and in the haste of grabbing up pukey laundry, I didn’t realize until the wash cycle was done that I had unintentionally washed my iPhone.

I did the old rice trick and it kinda, sorta worked….I could feel and hear my phone buzzing on vibrate, but everything else was dead. Long story short—new iPhone 5C is coming on Monday and I have been using our computer for Facebook and Twitter and our iPad (at home only) for iMessage and Instagram, so for my standards—I’ve been pretty much “unplugged” from social media the last 4 days. It is a significant decrease in my usage, and I gotta say: not as bad as I thought it would be.

This last Monday I could tell something was wrong with Braden. He woke up at 8:30 when he’s usually up by 7 and had a low grade fever of 37.9. He ended up falling asleep on the couch in the late afternoon and had a nap. I took him up to his cousin’s house for supper with the family and he was flushed in the cheeks and just unwell. By the time we got home he had spiked a fever of 38.8, I gave him some Advil and took him to the walk-in clinic. I never really got a diagnosis, just that his ears were red and on the verge of being infected and that his tonsils were swollen too. I don’t like giving antibiotics when not necessary, but she recommended a 5 day treatment of Zithromax, and whether it’s helping or not, I can say that finally on day 3 today he’s finally getting back to himself. Still tired and not much of an appetite, but he’s drinking some water at least.

Then there’s Ethan. He seemed to pass the puke bug onto his cousin Luke, his Grandma, I had nausea all day yesterday but luckily kept my cookies in, and now today Auntie Laura is sick and Uncle Craig is nauseous too and I just got word that Papa isn’t feeling so well. One of the downsides of being a close family is sharing everything—-the good and the bad, apparently. Anyway, Ethan hasn’t been eating much and just not feeling well and he also had a low grade fever again this morning of 38.3, he slept in until 9AM which is unheard of and I put him back down to bed at 11:45 and he had a nice nap. He seems to have perked up and is sipping on milk and munching on Cheerios.

And to add more woe to the story, yesterday afternoon when I was resting and down for the count, Ethan fell off a chair and split his chin open on our ceramic tile in the kitchen. Daddy didn’t think he needed stitches, but ER nurse mommy definitely knew he needed stitches and he ended up with his first two stitches. He actually did really well, especially for how stubborn he can be, and we were home and in bed by 7. It just so happens that Uncle Craig had 3 stitches put in his chin the day before. 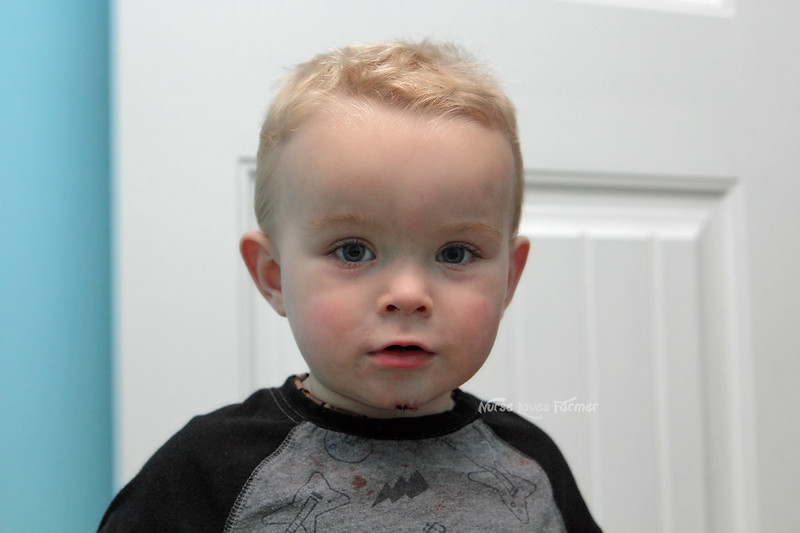 I survived 4 years and 4 months of parenting to the day (of two boys, no less) without any trips to the ER for stitches and Ethan broke my streak. Come to think of it, as Auntie Laura mentioned on Facebook this morning, Ethan is the first grandkid on both sides of the family to require stitches. I guess we’ll see if this foreshadows a future of silly, daredevil injuries? I sure hope not!

Hopefully we’re all on the mend now!

hello,thank you or your website , evyenthirg is illustrated very well specially the videos are very helpfull .i tried this pattern but i was confised how many stiches should be cast on ? odd ,even or multiple of a number ? please advise.thank you .

Man poor you and poor boys. I swear second children are the ones to get hurt and give us heart attacks. Noah had stitches arond Ethan's age and well, then there is his broken arm. Ugh! I hope your boys are on the mend. Bummer about the phone but hooray for an upgrade!
My recent post Memorial Day Weekend: Welcome Summer

Yeah I dunno if it's trying to keep up to older brother or what, but Braden is not this daredevil child that Ethan is. I wonder who Ryker will be?

I really wanted to hold out for the 6 or whatever new comes out, but oh well!

I hope everyone feels all better soon! As Jay's big sister, I have to say if your boys are anything like their father, I predict many daredevil injuries in the future! At the age of four Jay had scabs on top of his scabs and claimed 'I've lived with pain all my life!' He gave our mother a lot of heart attacks with his stunts!

Thanks, Deah. I hope Trin feels better soon too. Braden doesn't have the daredevil in him…but Ethan sure seems to. But Jay tells me he's never had stitches before! Broken bones, but no stitches. I love that he said that and he'll never live it down! 🙂

Holy busy couple of days for you!!! You'll need to put your feet up and try to relax this weekend!

Yes! Off to get much-needed groceries at Costco this morning and then I'm doing NOTHING this weekend!